Living Racism In VR With 'Traveling While Black'

Living Racism In VR With ‘Traveling While Black’ 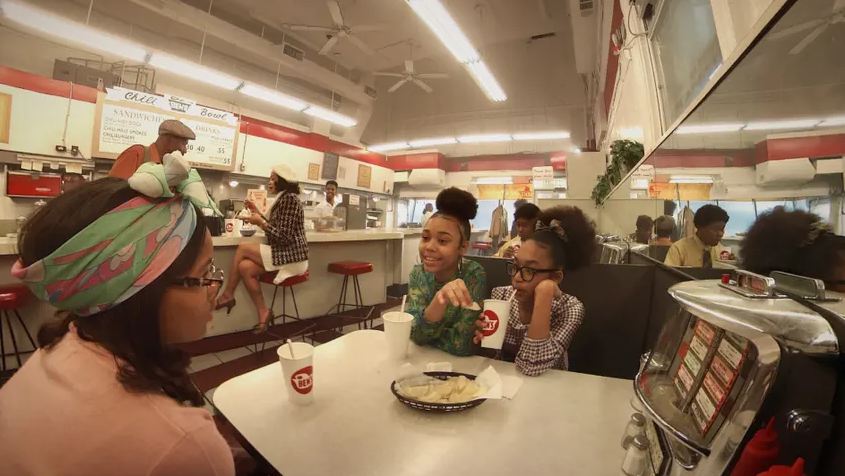 Traveling While Black, a virtual reality documentary, discusses the agony and trepidation of a people moving through a country that has not fully accepted them. Photograph: YouTube

In the Emmy-nominated virtual reality project, viewers are given an immersive historical experience on the depressingly topical dangers of being black in America.

The theatre has luxurious red velvet upholstered seats, grand ceilings and gilded trimmings. The rows of chairs stretch back into the ostensible blackness, with light beaming from the projector room. Ahead, archival footage of stylish black travelers pack the screen as an unseen narrator discusses the hardships of mid-20th-century black travel. Enabled by modern technology but trapped by racist social convention, their trips were eventually greatly eased by the publication of the Green Book, which listed safe spaces for black people to sleep, eat and replenish.

A car gradually appears next to the stage in black and white and a Green Book institution, Washington DC’s Ben’s Chili Bowl, comes into view. The seats have dissipated into a silent, empty U Street. For the next 20 minutes, the viewer will journey through the traumatic stories lent to Emmy-nominated virtual reality documentary Traveling While Black, which discusses the agony and trepidation of a people moving through a country that has not fully accepted them.

Traveling While Black is the first virtual reality project by Oscar-winning documentarian Roger Ross Williams, in collaboration with virtual reality studio Felix and Paul Studios. Glued together by the deep terror of racism, the documentary relies on a collection of interviews and poetic cinematic recreations to tell the harrowing tale of the danger that comes with having black skin.

Originally developed from a play as a multimedia project, someone suggested it might take better life as virtual reality project. Even so, its initial development was rocky. “It was tough figuring out the landscape because everything is so new,” Williams said. “At one point, this piece was going to be animated. At one point, we wrote a script and were talking to actors…”

But all parties agree that the story works best told through documentary film-making. “Documentaries are a lot more immediately mature as a medium of virtual reality, as a genre, as a format than fiction. We saw that this was too sensitive of a shoot to be experimenting with,” said Paul Raphael of Felix and Paul Studios. “We really wanted to do the material justice. It’s not the kind of subject you want to approach and not be respectful of.”

In the documentary, the aforementioned Ben’s Chili Bowl acts as a heartbeat of black DC, presenting itself as a central location for black travelers and locals alike. The virtual experience elucidates the concept and reality of an enduring safe space, too often stripped from black citizens.

Virginia Ali, the owner of Ben’s Chili Bowl, relays the history of the building as a black space, an old copy of the printed Green Book resting on the table of the booth before her. Ben’s Chili Bowl is the third iteration of the space, she says, originating as a silent movie theatre, then a pool hall, and finally, into the restaurant and institution where Barack Obama once visited for their famous half-smoke.

“From the very day that we opened, until the current time, it’s still a safe haven for people,” she asserts gently. To Williams, Ben’s was a natural choice to set a documentary. Ben’s encapsulates the combination of black ease and discomfort alike. “We wanted to basically take people back to the time when they needed the Green Book and they needed spaces like that. We wanted to connect that to the present because we still need spaces like that to show how much hasn’t changed.”

In the documentary, like in the lives of black Americans, there is nowhere to turn away from the horrors of racism. It besieges the viewer in its inescapable cage.

“If you’re not African American, you get to go into a space and be part of a conversation that you probably normally would not be privy to. If you are black, you get to delve deep into that inner trauma that we all carry with us in America as black people. I think that’s really powerful in the way that 2D storytelling can’t provide,” Williams said.

Raphael agreed, saying: “In virtual reality, you get to actually feel like they are there in front of you, much more strongly than by watching them on a flat two-dimensional rectangular screen. So that really changes how receptive you are to anything that is presented to you.”

But he admits its all-encompassing nature also poses a challenge. “[It] also means you have to recalibrate how you tell the story and what you present to the viewer. You could actually overwhelm a viewer very easily and have them shut down,” Raphael explains. “So it’s a very interesting and beautiful medium to work with. You need to be careful with it, but when you do it right, you can affect people in a way that I think is out of reach for cinema.”

The experience allows for the past and present to be presented in juxtaposition, merging to validate one eery conclusion: the problems of the past have not subsided. Former Student Nonviolent Coordinating Committee activist Courtland Cox contends in the documentary: “The assumption is that, at some time, it stopped. And that’s not the case. It never stopped.”

The creator of the Green Book, Victor Green, once said that if the guide went out of print, black people would have reached the proverbial mountaintop of equal opportunity. Traveling While Black directly challenges that. “It’s different, but we are still in danger as black people when we step outside of our doors,” Williams said. “I could be walking down the street in my own neighborhood and be killed.” 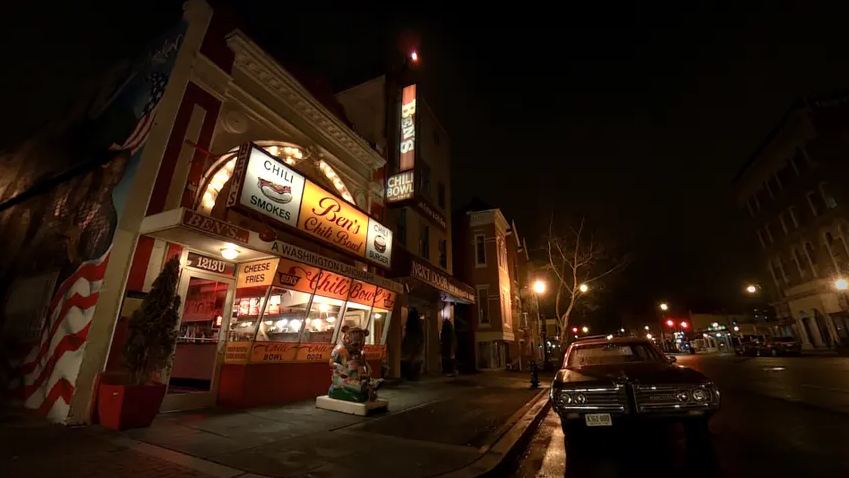 Indeed, the fears aren’t exclusively relegated to the bus or the train or even distant travel, says Williams. The documentary highlights one such example: the tragic extrajudicial murder of 12-year-old Tamir Rice, told through his reticent mother, Samaria, who describes the day for the first time to an audience inside the restaurant.

She was at home, when, only a short distance from his Cleveland home, the officers shot her child within seconds of their arrival on scene. He was unarmed. The video of the entire police encounter only takes a few seconds, wherein the viewer is whisked back to the movie theatre, ushering a sense of disbelief and removal from the horror on screen. When the viewer returns to the booth where Samaria is still seated, several of the patrons and servers are in tears.

“I will never get that vision out of my head,” she laments, telling the somber yet captive audience how she was restrained from being with her child during his final moments by the same force that took his life. Fiddling with her napkin nervously, she continues: “I wasn’t finished raising him. I wasn’t finished nourishing him and America robbed me.” When asked what the American dream is to her, she replies: “A nightmare. Especially if you black.”

“I wonder, when does it end?” Sandra Butler-Truesdale, a fifth-generation DC resident, ponders aloud in the experience.

It’s the kind of question Williams wants the viewers to ask after the experience. He understands the material will not carry the same weight to different groups but does believe in its power to start an honest conversation.

“I think that if you are not a person of color and you watch this film, you walk away transformed. You walk away [and] you feel the sort of empathy and the pain really that black people carry with them in a country that hasn’t confronted the reality of racism, in fact, in a country where racism is on the rise … As a black person, I want you to walk away and want you to have open and honest conversations with people in your community about that trauma. It’s like therapy. We need to talk about it.”